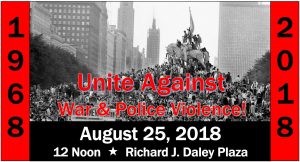 Fifty years ago, in the summer of 1968, the country was in turmoil. Rev. Martin Luther King, Jr., and Robert F. Kennedy had been assassinated. While most laws officially endorsing racism had been abolished, de facto discrimination remained stubbornly entrenched. The war to ensure U.S. domination of Southeast Asia had been escalating.

These conflicts came to a head in Chicago as it hosted the Democratic National Convention in late August 1968. The growing movement for peace was attacked by the Democratic Party leadership both inside and outside of the convention. Inside, although 80 percent of Democratic primary voters had voted for anti-war candidates Kennedy, Eugene McCarthy, or George McGovern, the party-insider delegates selected pro-war candidate Hubert Humphrey on the first ballot and voted down a proposal to support peace in the party platform.

Outside, Chicago Mayor Richard J. Daley called up 23,000 police and National Guard troops to suppress protestors. Police savagely beat and tear-gassed the thousands of anti-war protestors who came to the city to exercise their rights of free speech and assembly, in what was later aptly described as a “police riot.” Journalists and other bystanders were also beaten and arrested, including residents who happened to live where demonstrations were occurring.

The corporate media will cover these events from 50 years ago. We can safely predict that they will cover the history we’ve just recited with a superficial gloss, a time for nostalgic reflection with no bearing on today’s world. The talking heads will lament that there was so much “violence” back then; they’ll downplay comparisons to the present and ignore the real issues of the day that drove millions into the streets.

Worse, they will try to persuade us that the U.S. has mostly outgrown issues of war, poverty, racism – and the brutal tactics used by leaders of both parties, locally and nationally, to ensure these forms of domination. They will pretend that U.S. is not at war today, and that America’s efforts at military domination of most of the world don’t directly impact inequality and third-rate social services in every sphere here at home.

We call upon peace, anti-poverty, anti-racist and other progressive organizations to reject this narrative. We must reject the American ruling class’s attempt to whitewash its history and dismiss its current acts of criminal violence. The truth must be told: As in 1968, the U.S. economic and political elites, and their military servants, are still committing horrific acts of war against the peoples of other nations. They use our tax dollars to fund these wars while ignoring pressing human needs at home. Their police continue to suppress dissent and repress people of color and anyone else who dares to challenge their power.

In most respects, conditions are worse than they were 50 years ago. Consider:

There is a direct connection between the oppression of people of color at home and the U.S. wars on people of color in other nations. There is a direct connection between the federal government spending trillions of dollars on wars and other means of foreign domination, including the maintenance of nearly 1,000 military bases in other countries, and working people and students being driven into poverty and debt while millions lack access to health care, decent schools, higher education, safe drinking water and other necessities. These policies all serve to benefit the U.S. ruling class, the wealthy owners of major corporations and banks.

There are positive lessons to be derived from the Chicago 1968 Democratic Convention. The 50th anniversary of that event offers a unique opportunity to drive home the lesson that it is possible to stop a war. Stopping the U.S. war on Vietnam required a combination of courageous resistance by the Vietnamese targets of U.S. domination, U.S. soldiers refusing to fight for empire, plus an anti-war movement in the streets – steadfastly independent of both major political parties. Its independence was steeled by bitter experience— Chicago police wielding batons and truncheons, the heads of demonstrators cracking under the onslaught while a Democratic Party mayor applauded and other top Democratic leaders turned a blind eye.

At a time when Trump’s open appeals to bigotry produce revulsion among people of good will around the world, we have a duty to remind each other that war, mass deportations and police violence are bipartisan problems that won’t be solved by the next election. Success will require a concerted struggle against a violent, class-ruled system – including political institutions like the corporate parties that help to maintain it.

A revived and unified, on-the-ground movement for peace and social justice, and against racism, poverty and police violence, is badly needed in the U.S. today. We call on peace, anti-poverty, anti-racist and other progressive organizations, and all persons of conscience: Please come to Chicago, on August 25, 2018, and help us send a strong message: No more war! No more police violence! Fund human needs, not destruction and death! Respect human rights at home and abroad!

March at 1 pm to Grant Park and the Gen. John Logan Statue, scene of the most iconic protest at the 1968 convention.